BI recently argued that the recession risk is over, 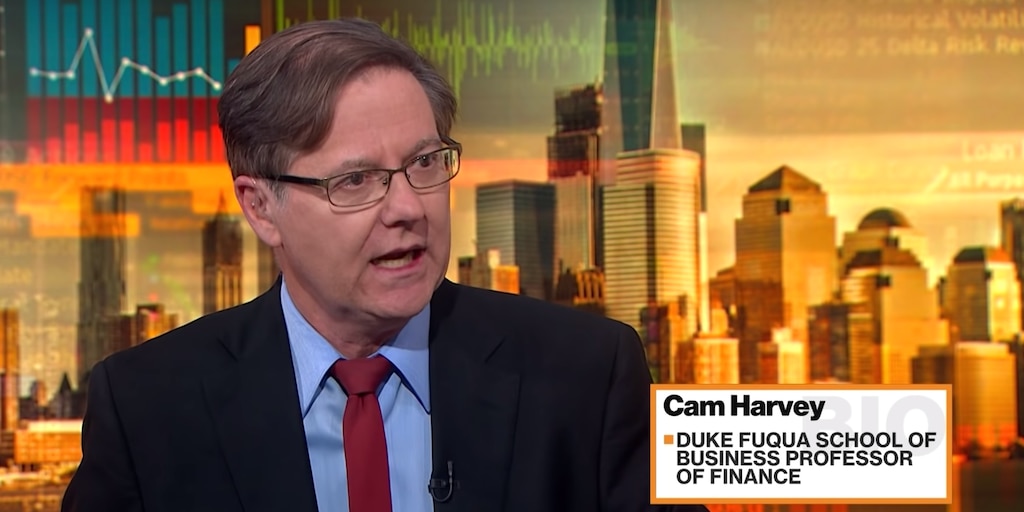 Campbell Harvey, the Duke professor who pioneered the inverted yield curve’s use as a recession signal, says his beloved model will break one day.

That hasn’t happened yet. A negative spread between three-month and 10-year Treasury yields â€” also known as a yield curve inversion â€” has come before each of the seven economic recessions since the 1960s. It’s a perfect track record that other indicators, or even other parts of the yield curve, can’t boast.

The latest inversion occurred earlier this year when worries around a global economic slowdown and possible recession sent investors rushing into Treasurys, which have historically been viewed as safe haven assets. Since bond yields trade inversely to price, this pushed 10-year yields sharply lower, bringing the aforementioned spread into negative territory. Read more…

The recession and the anticipatory fall in stock prices that preceded it has scared a lot of investors away from the market. This is unfortunate since it is during these times that the stock positions are built that result in the truly great returns. Just like shopping at the supermarket, the time to stock up is when things is when they are on sale.

Individuals tend to do just the opposite when it comes to investing, however, buying only after big run-ups and selling after prices have declined. The result is so pervasive that there are strategies that actually try to follow the inflows and outflows of “the crowd” and do the opposite. The more bullish the public is, the more stock one sells. The more bearish, the more one buys. This strategy has additional merit in that when everyone is bullish it probably means that they have already invested all of the money they have and there is little capital available to drive stocks higher. (Note that with real estate, once home prices has risen to the point that individuals could not even afford the payments with no money-down, interest only loans, housing prices quickly went from straight up to straight down.)

The difficulty is that individuals tend to equate buying and seeing prices rise with “winning” and buying and seeing prices falling as “losing.” One needs to get over this mindset to succeed at investing because it will cause one to miss out on great investing opportunities. If one buys a stock in a falling market and sees the shares decline a bit, one should see it as an opportunity to buy more at lower prices. If held long enough (and assuming that quality stocks are being purchased) the stock should be much higher than either price paid. One should take advantage of the fact that a falling market causes all stocks – good and bad – to fall. The difference is that the good stocks quickly recover while the bad languish.

Unfortunately, the style needed for successful investing runs counter to an individual’s normal psychology. If a person buys a stock and it goes down, he may initially stay with his convictions and perhaps pick up a few shares (like doubling down in gambling), but if the stock continues to decline he will eventually sell out. If he does not sell out, he may sell as soon as the price returns to the price paid, feeling that he “got his money back,” only to see the stock soar to new heights.

This can be avoided with a few simple strategies:

1. When buying a stock, particularly in a down market, build up a larger position by buying only a portion at a time. For example, build up a 500 share position by buying 100-200 shares at a time on dips. One should have a targeted number of shares before starting, however, to avoid the other common mistake of averaging down in a losing stock.

2. Plan to invest for the long-term. If one is planning to be invested for 10-20 years in a stock, one will have a different perspective on 10-20% declines.

3. Do not invest money that is needed in the near-term. If a retirement is looming or college tuition bills are just around the corner, funds needed to pay for these expenses should not be invested in the stock market. Because downturns can last for five to ten years, one should not have money invested in stocks that will be needed within the next five years or so. While putting cash into a CD may seem like a waste, the psychological peace it will give will result in smarter investment decisions.

The other question that may be asked is “What types of stocks should one buy during a recession?” As was previously stated, all stocks tend to go down during downturns in the market. This means that the shares of the top companies in a sector will tend to fall along with those of the second and third-tier companies.

Find the companies that are leaders in the industry, which probably had higher PE ratios than the industry average during the good times. Other good signs are companies that have little if any debt, strong cash flows, and had consistent earnings growth. These companies will tend to be stronger than their competitors and therefore better able to weather the recession. They will pick up market share as their competitors fail, emerging from the recession stronger than ever.

2 steps to take to protect your money from a recession, according to a financial expert and bestselling author